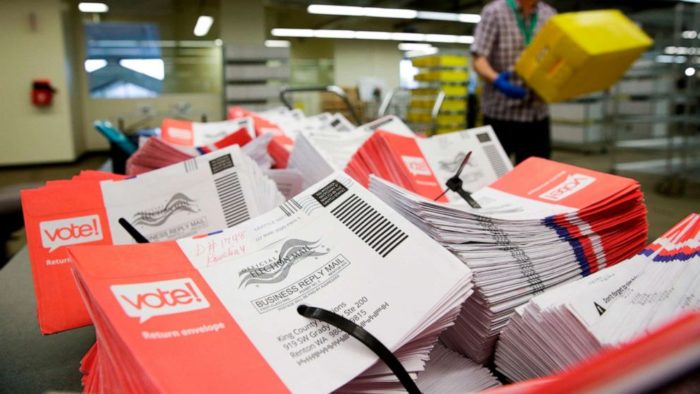 The Democrats have finally tipped their hand – their actions to hype a severe flu into a nationwide panic are purely political. Without a strong candidate for President, their chances of beating Trump with his historically successful economy are nil.

Having failed with character assassination, Russia collusion, and a groundless Ukraine phone call impeachment, their only remaining hope is to wreck the economy to keep the election in November as close as possible, and then cheat their way to victory in the swing states.

The first hint was when House Speaker Nancy Pelosi tried to include in the Coronavirus Stimulus bill a rule that would have ordered states to mail absentee ballots to all registered voters, rather than allowing them to require a signed, absentee ballot request form that would be authenticated by election officials before the ballot is mailed to the voter.

As the rest of the country is trying to reopen to save our economy, it’s the Democrats in the House of Representatives and Democrat governors who are leading the way in tactics designed to delay reopening and scare Americans from voting in person.

“In addition to the 244 counties exceeding 100% voter registration, another 279 counties across 31 states exhibit implausibly high registration rates of 95 to 99 percent.”

In January of 2019, Judicial Watch announced that it had signed a settlement agreement with the State of California and County of Los Angeles to begin removing as many as 1.5 MILLION inactive names from their voter registration rolls as required by the National Voter Registration Act.

It is the Democrat states that have resisted checking and clearing out invalid voters on their rolls, citing the need to “allow everyone to vote.”

They have resisted all attempts at voter-ID laws, saying that some disadvantaged voters are too poor to get an ID, while Nigeria, where the average annual income is less than $20, has universal voter IDs. And they have championed “motor voter” laws that automatically register people to vote when they get a driver license, even if they’re not eligible to vote.

Mail in voting is notorious for its fraud possibilities and the Democrats are sure to exploit each one. On May 8, California became the first state use the Coronavirus pandemic as an excuse to send mail-in ballots to every address on the voter rolls.

“All registered voters in California will receive a mail-in ballot for the upcoming November election, Democratic Gov. Gavin Newsom announced during his daily pandemic briefing.

The state is not moving to mail-only, however, and in-person voting will remain an option.

“Mail-in voting is important, but it is not an exclusive substitute to physical locations,” Newsom said, noting that some people are simply not comfortable mailing in a ballot.

The move, resulting from an executive order Newsom signed earlier Friday, makes California the first state to make voting by mail in November an option due to the coronavirus pandemic, Secretary of State Alex Padilla said.

“This election is slated to be the most consequential election of our lifetime,” Padilla added, noting that postage on ballots will be pre-paid. “We remain committed to providing as many safe, in-person opportunities to vote as possible on and before Election Day.”

By mailing ballots to inactive voters, deceased persons, and people who have moved out of state, there’s a certainty that many of these ballots will be collected or bought, and filled out and mailed in by others.

New Jersey, Pennsylvania and Delaware are also pushing for mail-in or even online voting. Surprise! All three have Democrat governors.

Online voting is even scarier than mail-in or absentee voting because there is no paper trail to double check. Votes can be switched, deleted or simply made up and no one will ever know.

Same day registration and voting is another Democrat favorite. Reducing the restrictions on types of proof needed to register is done in the name of letting “every person vote” but really means that dedicated fraudsters can register and vote multiple times.

Starting in 2018, California organizations with a clear political agenda were legally permitted to go to a location such as a nursing home or a church, and collect (“harvest”) ballots. They would then deliver these ballots to a polling place or an election office, often hundreds at a time.

Of course, if the “harvester” collects a ballot with a vote for a candidate they don’t like, they can simply throw it in the trash, or worse, alter the vote to their preference.

In 2018, California Central Valley Republican Congressman David Valadao had a 5,000-vote lead over his Democrat challenger, T.J. Cox. The networks called the race for Valadao that evening. But there were still ballots to be delivered by the vote harvesters. When they were counted there was a 5,900 surplus of votes for Cox (in a conservative district) and Valadao lost by 862 votes.

In the 2018 election, the first after ballot harvesting was permitted in California, Democrats won every single congressional race in Orange County, which had been a Republican stronghold for thirty years.

The sanctity of the vote is one of the bedrocks of American democracy. If we let it be undermined, we lose our country.

We may be able to get our states back open for business, only to lose our right to a fair vote, leading to a Democrat-controlled House, Senate and Presidency. We need to expose their plans for all to see, and resist them through all political and legal means possible.