When will Democrats condemn the left’s growing turn to violence?

Last week, a man was indicted for threatening to kill Republican Rep. Diane Black. “They were serious enough threats that the grand jury did take action,” Black said in an interview with Fox News.

It’s been barely a year since the shooting of House Majority Whip Steve Scalise during congressional baseball practice, and the story of the threats to Black was barely a blip in our news.

The shooting last June should have been a wake-up call for our political discourse, but we’ve only been on a further slide since then.

This month, Black’s fellow GOP congressman Jason Lewis says his daughters were threatened. A man threatened to chop up Sen. Rand Paul’s family with an ax.

Another was arrested outside the campaign office of Rep. Lee Zeldin for threatening to kill supporters of President Trump. And the Nebraska GOP office had bricks thrown through its windows and graffiti painted on its wall.

Last week, a guy was beaten up in Oakland after a crowd thought he was a member of the Proud Boys, a right-wing pro-Trump men’s rights group.

In September, I wrote about the perils of Nazi-punching, and how the online glee about a white supremacist being punched was misplaced and dangerous. One of my concerns was that the violence being cheered wouldn’t end with Nazis. It didn’t.

A telling incident took place this month when a group of Proud Boys wearing MAGA hats got into a fight at an LA bar. This LA Times quote from Josh Androsky, who led the fight against the Boys, is a stunner: “The Proud Boys say they’re not Nazis, and duh, they’re not from 1945, they’re not 100 years old. But in America, there’s a fun little thing, which is a catch-all term for right-wing racist hate groups, and it’s Nazi.”

He added: “The First Amendment protects the right to peaceably assemble. There’s no such thing as a peaceable assembly of Nazis. Just by virtue of their ideology, they are causing harm.”

Absurd. Even actual 100-year-old Nazis are protected by the First Amendment. Where are the prominent liberals to tell their supporters that, no, they can’t actually punch anyone they disagree with?

Before the election, there was a lot of concern that Donald Trump would lose and his supporters would take to the streets. Quartz magazine quoted Trump supporters who threatened “revolution” if he lost. An LA Times op-ed by Doyle McManus found Trump fans saying there’d be a “civil war.”

Since the election, there have been similar pieces about what Trump supporters would do if he were to get impeached or if he lost in 2020.

But there’s been very little exploration of the continuing violent outbursts by people unhappy that Donald Trump is president. The inevitable march from confronting cabinet members in restaurants to confronting ordinary supporters of the president continues apace.

Where is the Democratic leadership? What would their response be if the party ID were reversed? And why isn’t the media hounding them for answers?

Even during the election, Republican leadership spoke out against Trump encouraging violence at his rallies. In March 2016, both Ted Cruz and Marco Rubio issued statements. Cruz was still in the race, so his shot could be seen as a political move on a competitor, but Rubio was out and pledging to support any eventual GOP nominee. Rep. Paul Ryan and Sen. Mitch McConnell both also made comments about the violence, with McConnell noting that he had spoken to Trump about it. 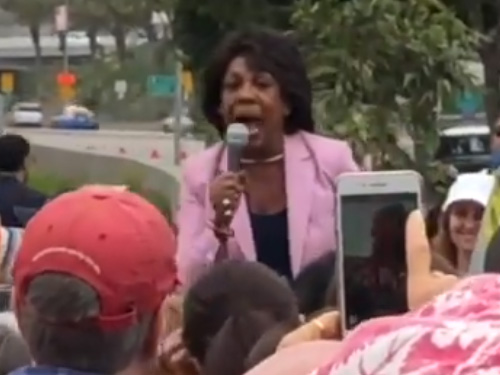 In June, Maxine Waters famously said, “If you see anybody from [the Trump] Cabinet in a restaurant, in a department store, at a gasoline station — you get out and you create a crowd. And you push back on them. Tell them they’re not welcome anymore, anywhere!” Her comments were greeted with appropriate outrage.

People — yes, even those who work in the Trump White House — should be allowed to pump gas or shop without having a crowd “push back on them.”

Waters responded to the criticism spurred by her comments by pointing out that Trump himself has called for violence on various occasions. “He started it” is never an excuse, and it won’t bring a lick of comfort to the family of the victim when someone inevitably dies from the escalation. Democrats need to step up and stop this before it’s too late.