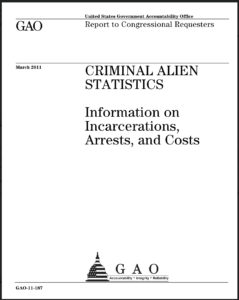 Based on our random sample, GAO estimates that the criminal aliens had an
average of 7 arrests, 65 percent were arrested at least once for an immigration
offense, and about 50 percent were arrested at least once for a drug offense.
Immigration, drugs, and traffic violations accounted for about 50 percent of
arrest offenses. About 90 percent of the criminal aliens sentenced in federal
court in fiscal year 2009 (the most recently available data) were convicted of
immigration and drug-related offenses. About 40 percent of individuals
convicted as a result of DOJ terrorism-related investigations were aliens.
SCAAP criminal aliens incarcerated in selected state prison systems in
Arizona, California, Florida, New York, and Texas were convicted of various
offenses in fiscal year 2008 (the most recently available data at the time of
GAO’s analysis). The highest percentage of convictions for criminal aliens
incarcerated in four of these states was for drug-related offenses. Homicide
resulted in the most primary offense convictions for SCAAP criminal aliens in
the fifth state—New York—in fiscal year 2008.

GAO estimates that costs to incarcerate criminal aliens in federal prisons and
SCAAP reimbursements to states and localities ranged from about $1.5 billion
to $1.6 billion annually from fiscal years 2005 through 2009; DOJ plans to
update its SCAAP methodology for reimbursing states and localities in 2011 to
help ensure that it is current and relevant. DOJ developed its reimbursement
methodology using analysis conducted by the former Immigration and
Naturalization Service in 2000 that was based on 1997 data. Best practices in
cost estimating and assessment of programs call for new data to be
continuously collected so it is always relevant and current. During the course
of its review, GAO raised questions about the relevancy of the methodology.
Thus, DOJ developed plans to update its methodology in 2011 using SCAAP
data from 2009 and would like to establish a 3-year update cycle to review the
methodology in the future. Doing so could provide additional assurance that
DOJ reimburses states and localities for such costs consistent with current
trends.

In commenting on a draft of this report, DHS and DOJ had no written
comments to include in the report.