California is now a “sanctuary state,” thanks to Gov. Jerry Brown and liberal Democrats in Sacramento.

The Golden State is home to an estimated 2.3 million illegal aliens. And police are no longer permitted to ask suspects about their immigration status or assist with federal immigration-enforcement activities.

To add insult to injury, liberals tried to free Jose Ines Garcia Zarate, the illegal alien and seven-time felon who was acquitted of murder and assault in the 2015 San Francisco fatal shooting of 32-year-old Kate Steinle. Fortunately, Garcia Zarate will not be released for “time served.” He’s been indicted by a federal grand jury for violating state immigration and gun laws and will remain in custody to face federal charges.

Yes, California voters are dumb for voting in liberal Democrats who continue to pass laws that endanger citizens.

For black Americans who might not understand this – you too will be impacted! Now that California has been designated a “sanctuary state,” illegal aliens, including MS-13, will flock to the state in droves and they’ll end up in the black community.

For the past 27 years, my nonprofit organization, BOND, has been trying to educate blacks on this issue with town hall forums, media, rallies, etc. Along with groups like FAIR, California Coalition for Immigration Reform and the late Terry Anderson, we’ve been warning the state and the nation of what was coming, but most blacks refused to listen.

We couldn’t get blacks to support a border wall or to vote against liberal Democrats who are selling them out for the Hispanic vote. Most blacks are so brainwashed by their godless black leaders, they’re willing to vote against their own self-interest. They blindly follow corrupt Democrats like Barack Obama, Maxine Waters, Karen Bass, Kamala Harris, Mark Ridley-Thomas and others who use them. All Democrats have to do is accuse anyone who opposes illegal immigration of being “racist,” and that’s enough to put blacks in a hypnotic trance and make them vote for Democrats.

The illegal immigration issue is out of control. The Hispanic population is growing rapidly, and it’s flexing its political muscle. There’s a warfare brewing between black and Hispanic gangs in Los Angeles, and it’s just a matter of time before it explodes. As a result, decent blacks are fleeing California and moving down south.

Illegal aliens are draining California taxpayers. According to Fox News, Los Angeles County taxpayers paid a whopping $1.3 billion in just two years for illegal-alien benefits and programs – nearly a quarter of the amount spent on the state’s needy population.

Over the past 60 years, the black community traded in values and principles for welfare and programs. As a result, most blacks rely on government assistance. Blacks are fighting with illegals in Los Angeles for health care, public education and other services.

I know many qualified blacks who’ve applied for all types of jobs in Los Angeles County and weren’t hired because they don’t speak Spanish; blacks are upset about this. If blacks stood up and demanded that their elected officials do something about this issue, the problem could be solved. But they’re so angry and preoccupied with blaming the white man, they can’t see that they’re voting for their own self-destruction.

The NAACP has completely sold out blacks. It supports amnesty, and it has allowed illegals to hitch their plight to the civil-rights struggle of blacks. The shameless NAACP is also pushing the insidious lie that increased immigration is helpful to the black community.

Members of the corrupt Congressional Black Caucus unanimously support amnesty for Hispanics and for the more than 3 million immigrants of African descent.

Except for a handful of black conservatives like myself, Sheriff David Clarke, Larry Elder, Walter Williams, Thomas Sowell and Peter Kirsanow, there aren’t any black voices boldly speaking out about the devastating impact illegal immigration is having on black Americans.

Democrats are giving out all kinds of taxpayer funded goodies to seduce Hispanics and addict them, just like they did to blacks. They’re brainwashing, spoiling and dumbing them down to use them for votes. There are some decent Hispanics who don’t agree with rewarding illegals, but they’re too afraid to speak out.

And now that California has legalized the sale of recreational marijuana, the state will attract more criminals and the worst kind of people. What a shame!

President Trump and Congress are deliberating the future of Deferred Action for Childhood Arrivals, or DACA. Trump has reiterated that he wants to work with Democrats to find a permanent legislative solution to allow those protected by DACA to stay in the country, but only if it comes with a long-promised border wall and major changes to the immigration system.

Blacks need an advocate on this issue, and they have a friend in President Trump. But if they don’t wake up and stand for what is right, they will be permanently replaced.

For blacks to free themselves from this nightmare, they must first turn back to God and love Him with all their soul and might. Second, they must abandon group thinking and the Democratic Party. If they do this, we can make America great again overnight. 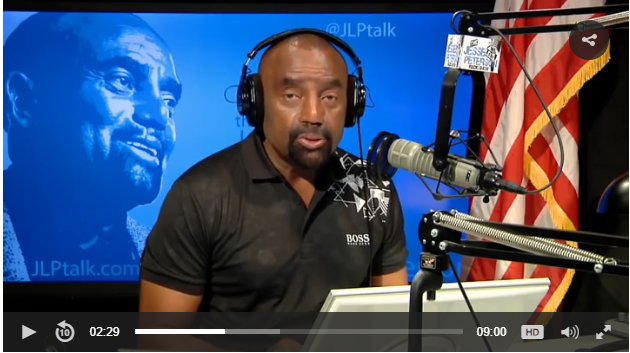 Jesse Lee Peterson – host of “The Fallen State” TV show on WND-TV – is the most courageous, outspoken critic of the “civil rights” establishment in America today. Raised without his father on a plantation near Tuskegee, Alabama, during the Jim Crow era, Peterson has lived a part of America’s history few have experienced. After a spiritual transformation, Peterson founded BOND, a nationally recognized nonprofit organization dedicated to “Rebuilding the Family by Rebuilding the Man.” Peterson is also the founder of The BOND Leadership Academy, a private school in Los Angeles. He’s a radio talk-show host, speaker and author of “The Antidote.” In addition to writing a weekly column for WND, Peterson appears as a media commentator on Fox News Channel, CNN and other national TV and radio networks. For more information, visit www.bondinfo.org.
Read more at http://www.wnd.com/2018/01/sanctuary-for-illegals-becomes-blacks-worst-nightmare/#GFo9gA4zg7tMitJX.99