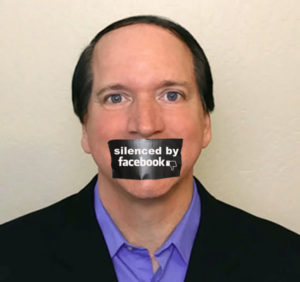 After Facebook blocked more than 88 million people from Steven Andrew’s conservative and pro-Christian posts, the mild-mannered pastor decided to fight back by creating a powerful pro-American social media network. It’s called USA.Life, and “people are signing up as soon as they hear the news,” he said.

He reports that Conservatives love finding out they have an alternative to having their posts censored by Facebook and Twitter.”They are tired of worrying that their private information is being sold to politicians, big corporations, and even foreign countries,” Andrew said.  The new social network hopes to launch late this summer.

“USA.Life is safer than Facebook and Twitter, because we don’t spy on people,” he said, “and we don’t control which of their friends’ posts they can see.”

Turns out Andrew is a leading Silicon Valley Internet software expert, who has led Fortune 500 projects for Cisco, Better Homes and Gardens, Stanford, Sega and others over the last 30 years. He will use his software and Internet skills to manage the building of USA.Life, he says.

“Right after the 2016 election, Facebook started a massive campaign of censorship, blocking more than 98 percent of my reach,” he said. “That means 4.9 million people per month are missing content they asked to see.” Congressional testimony found that Facebook increased censorship after President Trump was elected. Facebook showed Andrew’s posts to 97,685 people last month, but he has almost half a million followers.

Over the last two years, Andrew estimates that millions of people have missed hearing his positive messages about God and ways to strengthen their lives, and the financial loss of donations are likely in the millions of dollars.

He is also developing a new search engine called 1776Free.com. Instead of a globalist and progressive bias that skews results to promote negative information about conservative causes and Christians, the site will use a “Pro-America Algorithm” that “promotes the values of our Founding Fathers while uniting the nation.”

Andrew’s crowdfunding campaign has already exceeded $150,000 of the $778,000 needed in order to fund and launch the project. New members are joining USA.Life every day to get the best usernames and to receive project updates.

“These two sites will dramatically increase the sharing of conservative news that has been suppressed by the social media giants. You and your family will be able to trust the Internet again.” said Andrew. Andrew gives a detailed overview, provides an assessment of the risks and answers frequently asked questions at USA.Life.

He is seeking donations and is even offering a generous “Thank You Bonus” for people willing to spread the word about his new project. “People pay fund-raising companies to help with projects, why shouldn’t I pay regular Americans who are willing to help me?”